It’s That Season Again. Histamine – What Are You Doing to Me?

Have you ever walked into a friend’s home and started to sneeze, or got itchy eyes, and then found out that your friend has cats? Are you able to tell what trees are in season because your nose gets congested and you have problems breathing? Do you have to scan ingredient lists, or ask about how foods are prepared when you eat out, because you know you’ll get diarrhea and stomach cramping if you mistakenly eat a particular food? If so, you’re likely affected by histamine.

Most of us know that when we have an allergy, histamine is the primary culprit that causes our eyes to water and our nose to run. This little protein molecule is stored primarily in mast cells and when released through a process called degranulation, can signal inflammation and itching. Histamine is found almost everywhere in the body and is particularly abundant in tissue prone to injury like our arms, legs, skin and blood vessels.

When we’re exposed to invading pathogens (like a virus or bacteria), allergens (like pollen or animal dander), or toxins (mosquito bites, snake bites, or mold), our immune system releases antibodies called immunoglobulin E (IgE) into the blood stream. The IgE then causes histamine to flood the area. How we experience this histamine reaction depends on the receptor(s) the histamine bind to.

There are 4 different histamine receptors in our body labeled H1, H2, H3, and H4 receptors. The H1 receptors are primarily found in the smallest blood vessels called capillaries, which allows the capillaries to become more leaky and can make the surrounding area appear puffy. The H1 receptors also work on smooth muscle contraction, primarily in the digestive and bronchial muscles, which presents as breathing problems like asthma and stomach issues like cramping. Over-the-counter (OTC) and prescription antihistamine like diphenhydramine (Benadryl) block the H1 receptor.

When they are turned on by histamine, H2 receptors cause increased secretion of hydrochloric acid in the stomach. They can also cause a slight increase in vasodilation (flushing), but more slowly than the H1 receptors do. H2 stimulation may also inhibit the release of a brain hormone called prolactin. Medications that block the effect of histamine on the H2 receptors (such as the OTC medications cimetidine, famotidine, ranitidine, nizantidine) are used for acid reflux.

The H3 receptors reduce histamine release in the brain, the peripheral nervous system, and elsewhere in the body. They also affect other brain neurotransmitters such as dopamine and may be implicated in Tourette’s syndrome. No drugs have been developed to specifically block or enhance this receptor, but researchers suspect that H3 receptor inhibition (or activation) may be useful in certain neuropsychiatric conditions. The H4 receptors are found in the bone marrow and on white blood cells and have effects on eosinophils and mast cells. No drugs have been developed for H4 receptors, but blocking H4 receptors might be useful in asthma and allergies. 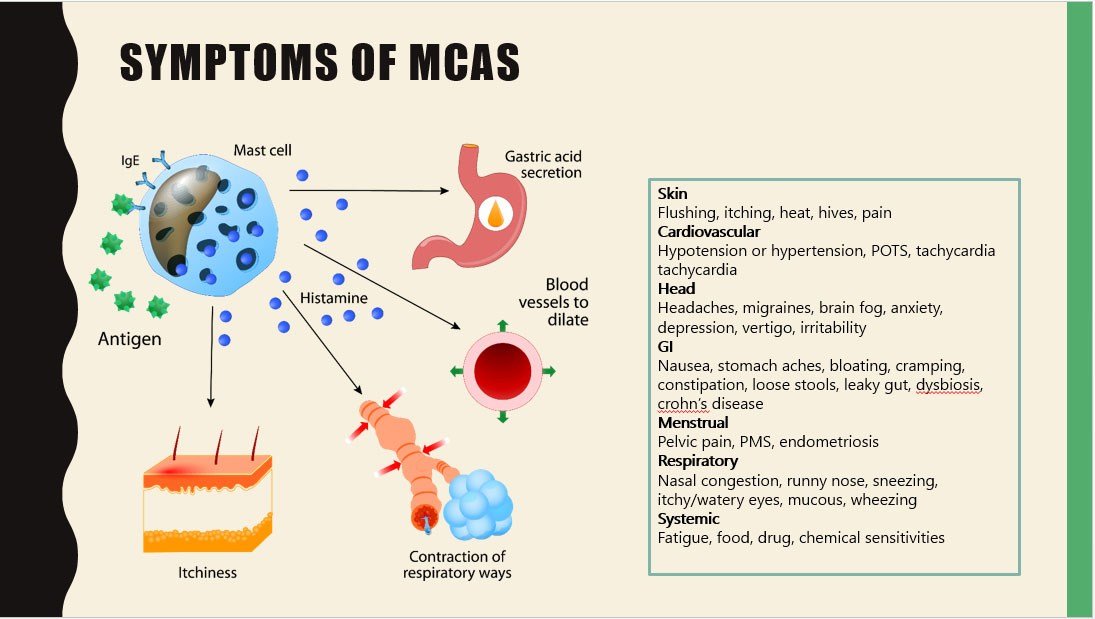 Now I have painted a picture that makes histamine out to be a pretty good villain. But like some of our favorite villains they can sometimes have a good side.

As you can see, we don’t want to completely get rid of the villain, or we also miss out on its benefits.

How does your body control histamine? It is broken down through two processes: (1) oxidative deamination and (2) N-methylation. These enzymatic processes control the breakdown of histamine in different areas of the body. In the gut, the body makes an enzyme called Diamine Oxidase (DAO). The job of DAO is to break down histamine and keep it from binding to too many receptors. If your body doesn’t make enough DAO or if it can’t keep up with the demand for DAO after you eat something that causes a reaction, you can take an OTC product that contains DAO to help counter the allergic (histamine) reaction. DAO generally stays in the gut.

The enzyme that processes N-methylation is called N-methyltransferase. There are some self-help strategies to support and improve this methylation process:

Several natural supplements can also be effective, such as quercetin and vitamin C. These can be used together. Just make sure you get a quality professional supplement! Curcumin is another natural supplement that some people find helpful for their histamine problems, but this isn’t as universally helpful as quercetin or vitamin C are. Be aware that curcumin makes the histamine problem worse in some people, instead of better.

Most of us occasionally experience the discomfort of seasonal allergies or a reaction to a particular food or foods, which can be dealt with on a seasonal or as needed basis. If you are more affected than the average person, and despite eating a low histamine diet and avoiding your triggers, still have lots of issues, know there are clinicians available to help you. As with all medical conditions, it is important to find the right practitioner who can help figure out a treatment plan for your histamine intolerance (HIT) or mast cell activation syndrome (MCAS). ISEAI is a wonderful resource for finding a practitioner to guide you through the answers to help you live your life to its fullest.

About the Author: ISEAI Admin

The International Society for Environmentally Acquired Illness (ISEAI) is a nonprofit professional medical society whose mission is to raise awareness of the environmental causes of inflammatory illnesses and to support the optimal health of individuals affected by these illnesses through the integration of clinical practice, education, and research. We seek answers about environmentally acquired illness through the human lens, exploring all perspectives, including conventional and natural medicine.

This site uses Akismet to reduce spam. Learn how your comment data is processed.

We appreciate your support in raising awareness! W

Sept 16-18: examining the misdiagnosis of complex

Registration is open 🔑 for the ISEAI conference

Two weeks to the ISEAI conference (Part 1) May 20-

In May, some of the best minds in the field of Env

The ISEAI conference is back in person in May 2022